June Pet of the Month – ‘Ratty’

June’s pet of the month is “Ratty” an 18 year old cat (that’s about 84 in human years!) At least some of Ratty’s success is down to her owner Tracey’s nursing care: Ratty has a long-term liver problem which requires frequent trips to the vets for treatment.

“Ratty” has a condition known as “triaditis” where the liver is inflamed, and sometimes also the pancreas and intestine. Although much
research is being done to find a cause, vets are still unable to say for sure why it happens.

Cats do have a very high concentration of bacteria in their small intestine compared to dogs, and one theory is that these bacteria can
reflux through the bile ducts into the liver, and cause disease.

Every few weeks, Ratty starts to be sick, and she comes in to have a long-acting injection of steroids and anti-nausea medication. Poor
Ratty: the anti-nausea injection really stings, but within 24 hours she is back to her normal self and feeling much better!

Other than this, Ratty is fighting fit and hopefully will live a happy life for another few years! 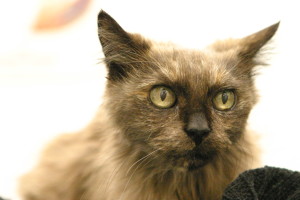